This is great news about ANTIFA All stupid college children supported by George Soros Open Borders and we the taxpayers pay for all of this to happen. If these cowards cover their faces like the Muslims Cowards that want to kill us. So be it if they want to start a war over Illegal aliens Mexicans that broke the law in the first place. They are not Immigrants they are Illegal Aliens breaking into this country. Well, I say to ANTIFA get your guns out and bring it if you willing to come to start the civil war. Tobad that George Soros doesn’t lead the way along with the Professors of hate that want this to happen. These Traitors and American born Terrorist, and Anarchists want to die we’re here to help them.

L.A. Antifa Group Calls for ‘Revolutionary Violence Against the Enemies of the People’

FTPLA calls for a “sea of armed masses” to stop ICE. Image via Facebook.

A Los Angeles-based antifa group is calling for a “sea of armed masses” to use “revolutionary violence against the enemies of the people” and ultimately “take power” in America, Far Left Watch reports.

The revolutionary Maoist group Serve the People — Los Angeles (STPLA) made the call during a recent demonstration in South Central Los Angeles, where “dozens of protesters” wearing red bandannas and carrying STPLA flags, banners, and a Trump piñata-effigy “rallied the masses” to demand the release of Gladis Hernandez, an illegal immigrant woman who is being detained by Immigration and Customs Enforcement (ICE). On Sunday, according to the far-left Incendiary News Service, the agitators marched and chanted, “La migra, la policia, la misma porqueria!” (“ICE, the police, the same sh*t!”) and “F*ck ICE! F*ck the pigs!”

They set up shop in front of the main entrance to the Banc of California Stadium and passed out fliers about Hernandez’s detention as soccer fans headed into the stadium for the evening’s game. During the demonstration, according to the report, they called for “militant escalations” and for the “defense of their undocumented working-class immigrant communities by any means necessary” (emphasis added). Photos from our rally for Gladis

One of the activists reportedly hollered, “Sheriffs y la ciudad, que se vayan a la verga!” (Sheriffs and the city, go to hell!)

Organizers and the masses lit road flares and delivered speeches to news cameras and onlookers calling on the release of Gladis, calling an end to all attacks on undocumented working-class immigrants, calling on organizing Unidades de Defensa Populares Revolucionarias (the People’s Revolutionary Defense Units) and using revolutionary violence against the enemies of the people.

Sheriffs, California Highway Patrol and other law enforcement agencies quickly began descending on the protestors and told them to extinguish their flares and stay on the sidewalk. But organizers countered their demands, told the masses they don’t have to do anything they say. 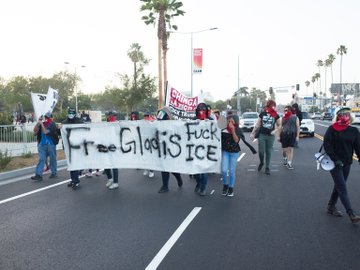 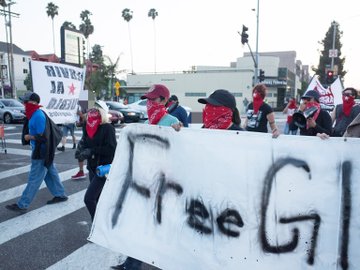 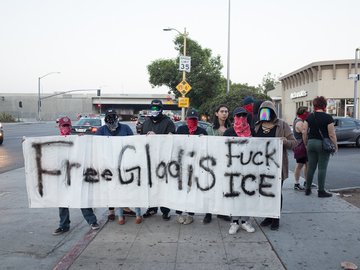 We took to the streets today to say FREE GLADIS and FUCK iCE with @stp_la @defendboyleheights @iceoutofnela. Street Vendor Gladis Hernandez was deported by iCE recently and we recognize that the #lapd iCE and the city work in a coordinated effort to deport our folx.

The revolutionaries reportedly “swarmed” around a truck, where “a white lady” inside appeared to laugh nervously at their intimidating behavior.