Skip to primary content
This extremely important read. This is true the spoken truth.
That is why our Government is our enemy thanks to that Traitor Obama and every Demo-rat that voted for this Traitor! here is where we are going to need our guns for our freedom!!!   But what  Reverend Graham left out was that Obama  had the support of every Senator and Congressmen  Demo-Rats and Traitor Republicans, the Fake news Media and the Bureaucracies. Also remember that every European country was for Obama. Every Muslim terrorists country was for Obama. He was allowed to do anything you wanted especially destroying the United States of America with all these people to help him, including that great organization that is kept us in a  war since 1950s, the UN. Obama was the primer  god of everything that’s evil on this earth that is supposed to destroy the United States of America. They all did their jobs well to help Obama killed the United States of America. That’s what Graham left out of his brilliant article.
Dauntless.
From Art: 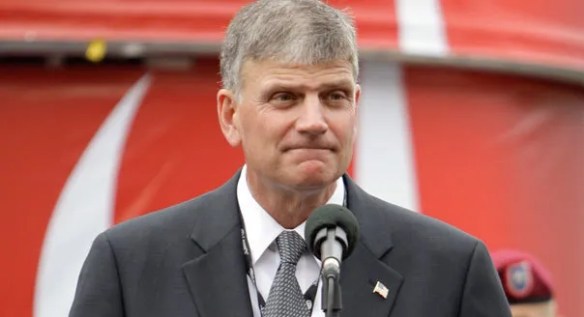 Time is like a river.  You cannot touch the water twice, because the
flow that has passed will never pass again.  Franklin Graham was
speaking at the First Baptist Church in Jacksonville, Florida, when he
said America will not come back.

“The American dream ended on November 6th, 2012.  The second term of
Barack Obama has been the final nail in the coffin for the legacy of
the white Christian males who discovered, explored, pioneered, settled
and developed the greatest republic in the history of mankind.

You will never again out-vote these people.  It will take individual
acts of defiance and massive displays of civil disobedience to get
back the rights we have allowed them to take away.  It will take
zealots, not moderates and shy, not reach-across-the-aisle RINOs
(Republicans In Name Only) to right this ship and restore our beloved
country to its former status.

People like me are completely politically irrelevant, and I will
probably never again be able to legally comment on or concern myself
with the aforementioned coalition which has surrendered our culture,
our heritage and our traditions without a shot being fired.

The Cocker spaniel is off the front porch, the pit bull is in the back
yard, the American Constitution has been replaced with Saul Alinsky’s
“Rules for Radicals” and the likes of Chicago shyster David Axelrod
along with international socialist George Soros have been pulling the
strings on their beige puppet and have brought us Act 2 of the New
World Order.

The curtain will come down but the damage has been done,

the story has been told

Those who come after us will once again have to risk their lives,
their fortunes and their sacred honor to bring back the Republic that
this generation has timidly frittered away due to white guilt and
political correctness..”